Is the Ground Paralell Coffin Bone Anatomically True? You Deside.

The ground paralell coffin bone / 30 degree hairline was introduced into the wild horse trim model concept by Dr. Hildred Strasser of Germany. The belief has been around for a long time before she promoted it and it has also been highly contested. However most people getting into barefoot trimming would not know the history of this belief or the disagreement between the so called experts concerning it. Many times we accept something at face value, becasue on the surface it looks logical and most of the time, we are new to the subject to begin with, and thus another option or the fact that there may be more to a subject than what we are first introduced to, is not obvious to us. I'm going to show you the truth of the anatomy of the horses foot and then you deside if the teaching that the horses coffin bone should be ground paralell is true.


Look at the picture above. This is a picture of a picture out of Strasser's book nicknamed "Big Blue", which you can purchase for around $800.00 (yes that's right $800.00) What this picture is showing is how Strasser put two bare coffin bones on a table, then drew their angles of where the toe wall and hairline on the horses hoof would be, if the bottom of the coffin bone was paralell with the ground. All this is based on the belief that the coffin bone must be paralell with the ground or what barefooters call "ground paralell". The idea is that then in trimming the horse if you trim to make the hairline 30 degrees and the toe wall 45 degrees (fronts) and 55 degrees (backs) you will accomplish the goal of making the coffin bones "flat" or that is "paralell" with the ground.

Now to look at the picture up there, that all seems rather logical. I mean after all look at the way those coffin bones are sitting on that table, the bottom is sure enough flat and perfectly level, or paralell with the ground, hence totally horizontal. Therefore it would seen that, sure enough the horses foot must be trimmed so that the coffin bone inside the foot is sitting gound paralell.  Now remember here that getting the toe wall at 45 or 55 and the hairline from the toe to the heel is the way in which you could accomplish this without xrays. 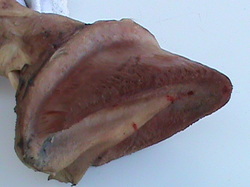 BUT THE BIG PROBLEM WITH THIS IS, the horses inner foot is more than just a bare
coffin bone. And because of the anatomy of the REST OF THE FOOT, which is
composed of the soft tissues of the frog corium, lateral cartilage of the heels
and the bulbs which when attached to that coffin bone and extend BELOW that
coffin bone, the coffin bone CAN NOT when attatched to the whole foot sit ground
paralell on a table. And the TRUTH is that the coffin bone when attatched to the whole foot will have what is called a "positive palmar" angle. That is it will be slightly raised, and the sole towards the rear of the foot is slightly thicker as it goes towards the heels.